Breaking Out of the Comfort Zone with BODYPUMP

“Only those who will risk going too far can possibly find out how far one can go.”

Our comfort zones are interesting things. For some, they are physical barriers. We’ve all known people who never want to leave their bedrooms. Even I am guilty of that one from time to time. For every person like that, there’s someone else willing to travel to the farthest corner of the globe at the drop of a hat.

More often, comfort zones are less about the distance we are willing to travel and more about the lengths to which we will go. For me, my comfort zone has always been on stage. Years spent as a musical theatre actor instilled in me a love for shedding my own skin, climbing inside a character, and using that character as a vehicle built to entertain an audience. For some, the thought of simply speaking in public is enough to make them break out in a cold sweat. Me? I was most comfortable when I was singing and acting on stage in front of thousands of people. The stage was my home. And I assumed that, no matter the stage or the audience, I would always be comfortable there.

Boy, was I wrong.

The thing about being an actor is that it gives you a chance to be someone else. Almost every actor I’ve worked with has talked about that very thing as being part of the motivation for pursuing a career on the stage. Diving in to a new character allows us to momentarily put down our own insecurities. That may sound a bit crazy, but actors and performers usually come with a bit of madness. It’s sort of why we do what we do.

Which brings me to Les Mills’ BODYPUMP. When I first stepped foot into a group fitness studio, I was scared out of my wits. I had been dragged there by a woman, you see, and by the intoxication of a new relationship. My first class was BODYJAM, and standing at the back of that room, I had never been more relieved to be standing in front of a stage, rather than on top of it. I had never been more awkward or uncomfortable, but through the constant reassurance of the woman I mentioned above, I kept at it. I tried BODYPUMP, and then BODYATTACK. As I continued my fitness journey, I became more comfortable, more confident, and more eager to learn more and challenge myself in those same group fitness studios I had once feared. 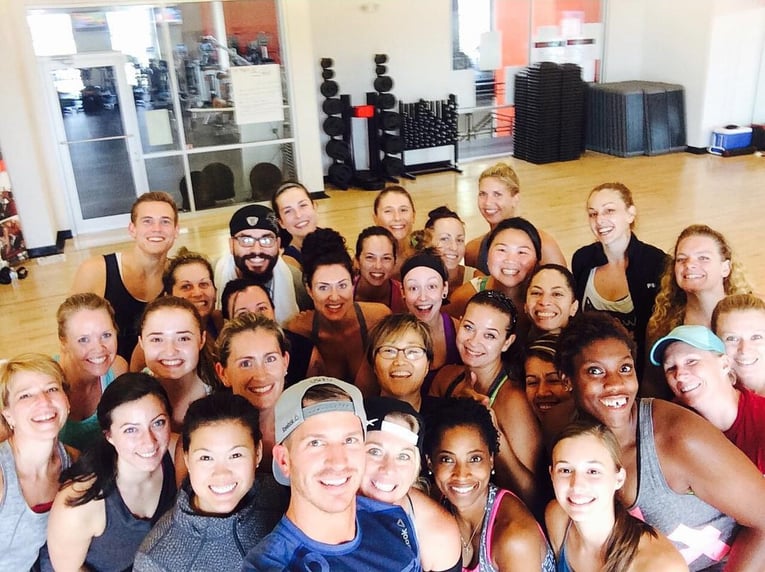 The author (top row, second from left) in his BODYPUMP class at Merritt

You see, standing on a stage and singing to thousands of people never scared me. I have since realized that I wasn’t scared because that wasn’t me on those stages; that was The Cowardly Lion, or Horton the Elephant, or Billy Bigelow. The end of my comfort zone arrived the minute I walked into that group fitness studio and took my very first BODYJAM class. I was forced to take a hard look at my own insecurities, decide whether I was willing to attack them, take a breath, and jump in face first. As soon as I realized what happens when we force ourselves out of those comfort zones, I was hooked.

Several years and a whole lot of polite (but firm) nudging later, I found myself facing my biggest fear of all. I had taken the necessary steps to become a BODYPUMP instructor. I had passed the initial training, submitted a video of me teaching to a few friends, and received my certification. The last step was to get up on that stage and teach a class. It took four months after I had received my certification to finally get on that stage. No costumes to wear, no characters to play. Just me, a barbell, 12 BODYPUMPers, and every one of my insecurities. On December 24th, 2015, with the same woman who had dragged me to BODYJAM three years earlier at my side teaching right along with me, I stared down my fears, and I won. I had never been more proud of myself, and I realized in that moment that no amount of applause from an audience can compare to the satisfaction of making a promise to yourself and following through.

I love BODYPUMP. I love the way the class makes me feel empowered. I love that it gives me the confidence to empower others. I love the sense of community that exists in a group fitness studio, and the fact that it’s one of the few places in the world where you can witness true bravery. It’s not easy to walk through those doors. Trust me, I’ve been there. But every time I hop on stage, and I face those same fears all over again, I remember why I’m there, and I remember what Les Mills and BODYPUMP gave me. By facing my fears, and by stepping outside of my comfort zone, I get to help others do the same thing. That’s why BODYPUMP exists. As a team, we can do anything.

BODYPUMP is turning 25 years old this week. On Saturday, January 14th, PUMP instructors and participants across the globe will all launch BODYPUMP 100 together. That’s tens of thousands of instructors and millions of participants. My role in this celebration will be a small one. Heck, I’ve only been a part of the family for about a year. But what matters is that I have a role. Maybe not the kind of role I used to play, but I will still be on stage. I will still be performing. And the character I’ll be portraying is my favorite one of all: I get to play me.

So if you’ve been considering stepping out of your comfort zone and trying something new, there’s no better time than now.  We’ve still got some space available in our classes.  All Merritt Club locations will be launching BODYPUMP 100 at 10:00 AM on Saturday and we want to make the Merritt party a big celebration, not just of this great program, but for our amazing members as well.