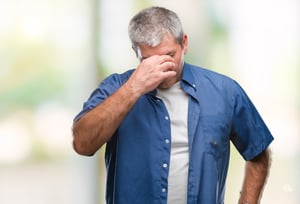 If you’re feeling a little fuzzy and forgetful, and not as sharp as in the summer months, you may want to blame it on the colder weather. According to a 2018 study from Columbia University, for many people, especially older adults, the cold weather can create a significant enough effect on the brain that they go from scoring in the normal range on a cognitive test to qualifying for a dementia diagnosis. Study authors found that when cognitive tests were given during the winter, participants functioned as if they were more than four years older as compared to performance during the summer.

The main theory behind this is that a lack of sunlight may affect the hypothalamus, which in turn affects the formation of neurotransmitters in the brain. And, it wasn’t just the cognitive tests that changed during the winter months. Higher levels of Alzheimer’s proteins and genes in cerebrospinal fluid were also found.

Brain fog itself is not a medical condition. It’s simply a term used for certain symptoms that can affect your ability to think, possibly leaving you feeling confused or disorganized, or even making it difficult to focus or put thoughts into words. But, slower cognition in the winter doesn’t have to be the norm. Here are some strategies you can employ to help beat brain fog and stay sharp whatever the season.

Check out some of our classes specifically geared towards active agers and older adults: Active Spirit, Silver Core Fusion, Arthritis Plus, Silver Sneakers, and more.