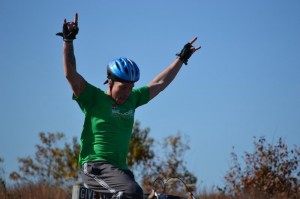 A little over a week ago, another addict lost the battle with his disease. This addict was my friend, Matt. I met Matt through a small non-profit triathlon club for recovering addicts, Tri-harder Triathlon Club. Like many other members, when I joined the team I was broken both physically and emotionally. I was spiraling down the drain of depression.

Immediately, I felt at home with this ragtag team of lovable misfits. We use the term 'triathlete' liberally with this crew. We have triathletes from all walks of life, all ages, and abilities. Some of us haven't sat on a bicycle since we were children, some of us can't swim or even run. Originally, I joined the team to share my experience training for triathlons, as well as to fill a hole in my life that was left behind after completing my first half-ironman and getting injured. What I got out of the experience can scarcely be put into words. It was more than I ever anticipated. It became evident after a short time that the term 'recovery' can be applied just as liberally as the word 'triathlete' in our group.

Matt was a part of the team before I joined and had moved on by the time I started attending practices. However, I knew of him through stories, photos and because he was, quite literally, our poster child. That's him in the photo above. Tri-Harder uses this photo of him triumphantly crossing the finish line in almost all of our marketing materials. I have no doubt that during his time with the team he experience the same acceptance and sense of accomplishment that I did. He would say so himself if anyone asked. Some time after I joined the team we got word that Matt was not doing well, and had landed in jail. The team sent him letters, and he wrote back to us. When he got out he resumed practices with us, and that's when I got to know this remarkable young man.

The last time I saw Matt was during the MCVET's Memorial Day 5k and 10k race. Matt was a combat veteran. After graduating from high school he enlisted in the Marines. He served overseas for three tours of duty. At the time of his death he was taking advantage of the services offered to veterans at the Maryland Center for Veterans Education and Training (MCVET). In honor of Matt, Tri-Harder participated in the 5k and 10k race that benefited the organization. However, in our usual fashion, we were a tad unorganized and running late. We set off minutes after the starting gun was fired. We had not found Matt before the race and so, he started alone.

It was hot. I hadn't been running regularly, and oh, yeah, the finish was uphill. Barf. As I started climbing my way up Charles St. in the last quarter-mile, I spotted Matt in front of me. I was willing him to slow down, and my lead-filled legs to speed up so that I could catch him. After what seemed like forever, but was probably only a few seconds, I was close enough to call his name.

He turned and looked almost as relieved as I felt to see a friendly face and to be distracted from the agony one feels in the final quarter-mile of a 5k. We chatted through gasps of air and then fell silent as the hill steepened. The course leveled off and we turned the corner toward the finish line. I told him he better beat me and began to sprint with all the energy I could muster. A few seconds later he roared past me and we crossed the finish line laughing.

I'm so thankful for that moment we were able to spend together. My memories of him will always involve triumphantly crossing a finish line. Addiction and recovery are difficult topics to discuss, and generally people know very little about them. When an addict overdoses, the shock and anger make it difficult to comprehend. This is a great post that can give you a clearer picture of the struggle addicts face. It states, as an addict...

"...he suffered from a deep sadness, a deep loneliness and a deep disconnect between himself and the world around him. He felt, for lack of a better description, not quite right. Regardless of his undeniable talent, he felt uneasy. He felt just not “good enough”. He felt apart from the world, from other people, from a spiritual connection to others and from himself...He did not “choose” to get high again. Someone that is drowning does not “choose” to gasp for air. It just comes natural. His choice was which path to choose. Immediately relief from something he knew could kill him. Or a healthy alternative, slower but more sustainable. And not a deadly path. He chose one of two paths. The unhealthy one, but the one he knew would guarantee an immediate relief from his pain, from his loneliness, from his suffocation. He overdosed and died seeking relief, because for a drug addict without a healthy solution, that’s what happens."

I would argue that these feelings are not unique to individuals that abuse drugs and alcohol. Many individuals that do not abuse drugs or alcohol can relate, perhaps to a lesser extent. At some point or another most of us have sought out a means of relief that wasn't particularly healthy, whether it was in the form of overtraining, a decadent desert, a one night stand or a few too many drinks. At one point or another we have all looked for a distraction, an escape or solution to shelter us from the difficult realities of life.

When I joined Tri-Harder I realized that I had been running from myself for a long time. None of the goals I was chasing brought me the satisfaction I was seeking. At first I used graduate school to keep me busy. When I graduated, I replaced school with triathlon training to find fulfillment. By the time I completed the race and was injured, I finally ran out of the "healthy" ways I'd learned to cope with my own feelings of inadequacy. It was a difficult time, but with Tri-Harder I realized I was not alone.

After every practice we would have a 'recovery moment' where we shared things that were on our mind. At first I hated this moment. I was terrified of being called on to share. I remained silent, eyes downcast, so as not to draw attention. Isolated. When I finally stopped being so afraid of being seen and started listening to what everyone was saying I was blown away by the honesty and bravery of the people around me. I was inspired and eventually found the confidence to share my own thoughts.

I found that to be in recovery means you must first take a good long look at yourself, you have to see your flaws as well as your strengths, and you have to make peace with them. For an addict, their life depends on it. I want to take it one step further though. For anyone that is avoiding that long hard look in the mirror and the feelings of inadequacy that often come with it, you may be fighting for your life too. You are just like me during the recovery moment, eyes downcast, praying not to be called on, trying to avoid saying something that might give away your secrets, and all the while missing out on the amazing people and events going on around you. You are not living. You will not experience the joy you are seeking through your distractions. You will be unable to make the healthy lifestyle changes you so desire. You will not feel the connection you seek with those around you.

We end all of our Tri-Harder practices and meetings with the Serenity Prayer; a prayer that epitomizes the process of recovery. "Grant me serenity, to accept the things I cannot change; courage to change the things that I can, and wisdom to know the difference." Followed by a final "Keep trying harder!" We are all waging our own private war against the ugliness we see in ourselves; against the things that we think make us unlovable. Matt's battle is finally over. He has crossed his final earthly finish line. Recovery is the ability to stop running and fighting; to take a good look at yourself; to know that you are imperfect yet capable and deserving of love. And it never ends. You have to keep trying harder. 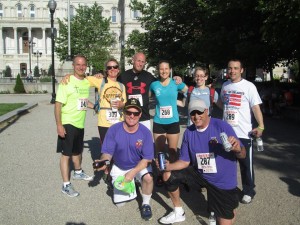 Joanna Meade (view bio) is a NSCA Certified Personal Trainer at the Downtown Athletic Club. She is a Level OneCrossFit instructor and competitor. She can be reached at Merritt Athletic Clubs Downtown Club at 410-332-0906 or click here for a Free Session.