Challenge Accepted: Where Have You Been All My Life? 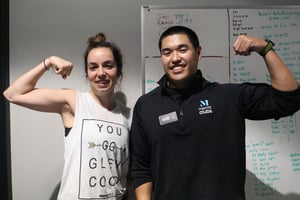 Did you guys try anything new this month? I did, and I must say, it was possibly one of the best experiences I have had all year. I worked out with a Personal Trainer.

Now I know what you are thinking. Those Personal Trainers are hard-core, and their job is to make other people hard-core so they can all ban together and create an army of hard-core, protein shake-drinking muscular beasts. It was weird though…. Turns out Personal Trainers are actually people and they only really want to make you better at whatever you are trying to accomplish, not make it so your sleeves will rip open when you flex your giant biceps.

HOW DID IT GO:

I worked out with Shane from Merritt Clubs Canton. Not only was he really nice/funny/good at making me feel comfortable, but he actually helped me and made me feel much more confident about working out on my own!

For the last 2 years, I have been having some hip pain. Nothing major, just a little sore when I worked out. I had seen my Primary Care Physician about it, who recommended I see a Physical Therapist. The Physical Therapist gave me some exercises to help strengthen the muscles around my hip so I wouldn’t put so much pressure on it. I had been practicing those exercises for months and it hadn’t made much improvement. When I started with Shane, I told him about my problem.

After doing an assessment of some basic movements, he noticed that my opposite knee naturally pointed slightly inward. He asked me if I had ever injured my leg/ankle and, guess what - I had actually have broken my leg 10 years ago! I didn’t even think to mention it to him because my leg has never bothered me or seemed to affect anything since it healed perfectly. But as it turns out, it was affecting me in a way that I didn’t even notice and took its toll on another part of my body!

His guess was that there was or had been scar tissue in my ankle from my injury that caused me to compensate without realizing it and slightly rotate my knee inward. Over time, it caused me to not have proper form when working out and put more pressure on my hip and created weak muscles surrounding it. Who knew that I could have a not-so-problem-area in one part of my body that would end up causing a much larger problem in a totally different part of my body? Shane knew.

Thankfully he was able to recognize this in the first session and he helped me correct my form so I could not only fix the pain, but prevent it from getting much worse in the future. He taught me how to correctly do a squat, a dead lift, a lunge, a push up, a plank, a straight crawl and an arm raise so that I could get more out of my workouts later. I hadn’t even considered the fact that if I wasn’t doing the exercises correctly, then they might not be doing much to improve my muscles. So here I was spending all this time doing squats to look good in my wedding dress for months before, and I was doing them wrong, so not only did that not improve anything, but it actually made my hip worse.

Something else Shane did for me was use the massage gun on my legs. He did this because, as he says, it helps loosen up the muscle knots that may hinder your ability to have proper form. I had a lot of knots that had been building up over time and was keeping my legs tight without me realizing it. I thought all I ever had to do was stretch! The massage gun, though painful at first because I am a gigantic baby, really did help. I was a little sore the next day but my legs felt looser and squatting was easier than ever after that.

I must say, I think taking at least a few sessions of Personal Training would be beneficial to every person, no matter their situation. Think about it, if you take a lot of Group Fitness classes like I do, you don’t get the one-on-one time that you may need to properly learn how to use each exercise to its full potential. Learning these things could make your BODYPUMP or SoulBody Barre class so much more effective on your muscles and feel better switching around to different exercises in your Boot Camp class. If you don’t take Group Fitness classes, this could help you learn how to use the equipment better, lift more effectively and have a better understanding of the proper way to work each muscle. I learned a lot that I can take with me every time I work out.

I will be honest, I was pretty nervous that he was going to destroy me in the first session and I thought I would never be able to keep up. But he went pretty slow at first, making sure I knew the positions before I really pushed myself. Over several sessions, it became harder, but not to a point where I thought I couldn’t do it. In fact, some of the Group Fitness classes I have taken were harder as far as strength and stamina, where my training sessions were more about learning how to properly work each muscle.

Although, on arm day, he had me do a bunch of exercises I have never done before. I struggled, but not embarrassingly so, because he helped me and didn’t push me past where I could go. The days after though were pretty painful – I had never been so sore in my life. But that realization kind of bothered me because I work out a lot, and it made me realize how many muscles I have that I have never used before! (See this GIF of me struggling on the skier machine thingy…)

Not only did I learn a lot, but I also feel more confident in going to the gym by myself. I had always wanted to try TRX or do exercises on the new turf at Canton, and now I know enough to not feel like a total idiot if I wanted to do it on my own! So I am more confident, more knowledgeable, my hip already is starting to feel a little better, and I don’t have to buy a new mattress since I was convinced that was the only way to make my hip better! And did you guys know, every member of Merritt gets one free Personal Training session?! Yes, you can try this out for free! Go in to your club to schedule a session with a trainer. No strings attached, just try it and see how you feel about it. 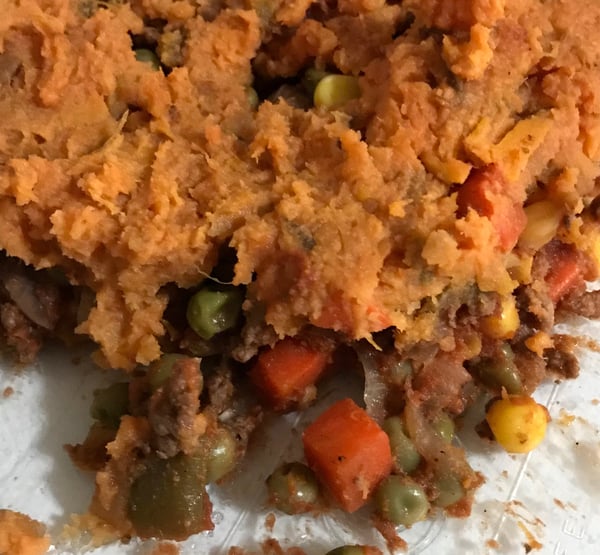 Preheat oven to 375 degrees. Bake the sweet potatoes until tender when poked with fork. In a skillet on medium heat, add the beef, carrots, onions, peppers, mushrooms and garlic. (Instead of cooking the veggies fresh, I just use a bag of mixed veggies and add them after the meat has been cooked so they don’t get soggy.) Cook until carrots are soft, about 12-15 minutes. Then add in the tomato paste, water, seasonings, salt & pepper.

Mash the potatoes once they are done cooking or blend in a food processor. Transfer the meat filing to a 9x9 casserole dish or cast iron skillet and top with sweet potato topping. Dash with salt and chili powder. Bake for 10 minutes at 375.