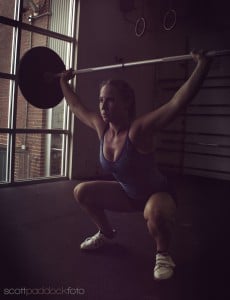 Strength does don't come from physical capacity. It comes from and indomitable will. - Gandhi

A funny thing happened a few years ago when I started strength training more seriously; a paradigm shift occurred. I realized I had starting thinking of my workouts as punishment. It wasn’t always that way, but some time after college I began feeling less and less like an athlete. I found my workouts had become penance for whatever prior dietary indiscretion I’d committed and not as much about preparation for a goal. When I started strength training with barbells my workouts were no longer a daily affirmation of self-loathing and disappointment, but rather affirmation of my own strength and perseverance.

My workouts once again became the best part of my day. I’d research movements while I was still at work. I couldn’t wait to get to the gym to test myself; to prove myself. It was new and scary. I found that becoming comfortable with my fear made me less affected by it. I came to understand that courage isn’t the absence of fear, but rather the ability to acknowledge my fear and not be persuaded; to look it straight in the eye and say, “You cannot control me.” And the most beautiful thing was, even if I didn’t make the lift and I had to bail, the thrill of trying far exceeded the fear and disappointment of failing. It made me both mentally and physically strong.

Sometimes I think if I hear another woman say she doesn’t want to lift heavy weights because she is afraid of getting bulky, I might ram my head into a wall. I used to think and say this too, but it couldn’t be farther from the truth. I wish I could go back in time and smack some sense into myself, kind of like those V8 commercials. This myth is so pervasive that it keeps most women trapped on the cardio equipment like hamsters in a wheel, far from the power racks and many of the benefits they long to achieve from exercise. Women have so much to gain from weight training.

The fact is, we do not bulk up like men from lifting weights. We don’t have enough of the hormones that cause hypertrophy, or muscle growth, to make us bulk up like a man. Cue Will Ferrell in Anchorman, “It’s science”. Cinnamon buns (i.e. a poor diet) will make you more bulky than barbells. I found a great list of the benefits of weight lifting that are specific to women at ideafit.com. This is a summary of their 10 reasons women need to pick up something heavy more often (the original article can be found here):

1. Lose body fat and gain muscle without bulking up. Research done by Wayne Westcott, PhD, shows that the average woman who strength trains two to three times a week for eight weeks gains 1.75 pounds of lean weight or muscle and loses 3.5 pounds of fat. Unlike men, women typically don't gain size from strength training, because compared to men, women have 10 to 30 times less of the hormones that cause bulking up.

3. Get Stronger. Westcott's studies also indicate that a moderate weight training program increases a woman's strength by 30 to 50 percent. Extra strength will make it easier to accomplish some daily activities, such as lifting children or groceries. Most strength differences between men and women can be explained by differences in body size and fat mass; pound for pound, women can develop their strength at the same rate as men.

5. Reduce Your Risk of Diabetes. Adult-onset diabetes is a growing problem for women and men. Research indicates that weight training can increase glucose utilization in the body by 23 percent in four months.

6. Fight Heart Disease. Strength training will improve your cholesterol profile and blood pressure, according to recent research. Of course, your exercise program should also include cardiovascular exercise and flexibility training.

7. Beat Back Pain and Fight Arthritis. A recent 12-year study showed that strengthening the low-back muscles had an 80 percent success rate in eliminating or alleviating low-back pain. Other studies have indicated that weight training for women can ease arthritis pain and strengthen joints.

8. Be a Better Athlete. Westcott has found that strength training improves athletic ability. Golfers, for example, significantly increase their driving power. Whatever your sport of choice, strength training may not only improve your proficiency but also decrease your risk of injury.

9. Works No Matter How Old You Are. Westcott has successfully trained numerous women in their 70s and 80s, and studies show that strength improvements are possible at any age. Note, however, that a strength training professional should always supervise older participants.

I will be leading a free Women and Weights seminar for 5 weeks at the Downtown Athletic Club on Wednesday nights at 6pm. It begins January 14th and goes through February 11th. It will be interactive; I will present topics and we will practice movements and concepts. It won't be a workout, but you will move. It is free to all, even non-members, so bring your friends and family. Women only though, sorry fellas. Send an email to cjoannameade@gmail.com with your name and contact information and the date you plan to attend. Non-members are eligible for a 12 day pass to the club. The schedule is as follows:

"Strong people are harder to kill than weak people and more useful in general." -Mark Rippetoe